CLINICAL EDITOR COMMENT
This article discusses a case of a youngster and family as they transitioned from active chemical dependency and moved towards sobriety. The author uses a creative approach to deal with the emotionally intense effects.

When I work with a child in play therapy, I am often amazed how critical issues, concerns, thoughts and feelings invariably permeate the sessions. To share with a very young child what I experience may be futile, if not inappropriate. Colleagues may not be available at the moment I am brimming over with emotion. What, then, do I do? I resort to expressing myself through avenues similar to those I would employ with my clients. This was the case when Brian completed play therapy. The result was the creative synthesis above – a poem that depicts my experience of his experience. Brian’s intake session began with his mother, a tall, sad looking woman with blue eyes flooded with tears. She readily recanted the history of Brian’s
short 6-year life. Perhaps most significant, two years prior to the onset of therapy, Brian’s parents, admitted alcoholics, entered into a program of sobriety.

Brian’s first four years of life had been chaotic, observing fiery arguments between the parents. Sometimes, in his naiveté, Brian would toddle between them, trying to intervene. His mother reported that this infuriated his father even more, and their fighting would escalate as she attempted to protect Brian from his father’s rage. Since sobriety, his parents’ common interests dissipated and as a result they tended to retreat into their own worlds. An aura of don’t talk, don’t feel, don’t trust lingered in their home.

Subsequently, Brian’s father joined his mother in just two of our parent consults. His father was a large man with a full beard and ruddy face. His demeanor was stiff and stern with intense, squinty eyes. A bit frightening to me, I wondered how it might be for his son. As the parents squabbled and fumed, I waited for the steam to emanate from their cranial orifices. I had heard of the term “dry drunk” and thought it was reasonably fitting.

Brian’s offenses were innumerable. Of late, he had pretended that the prized flower garden, which his father had laboriously tended extensive hours, were Indians that Cowboy Brian attacked mercilessly. His father was not pleased. Then there was his father’s tool shed. To Brian, the tools represented dinosaurs that needed smoking out with nothing less than a small fire. Again, his father was not pleased. His mother was usually caring for Brian’s angelic 2-year-old sister, who had not witnessed the heated parental disputes, and happily she would cuddle into her mother’s arms. His father was engrossed in solo projects. The picture was beginning to formulate of a little boy whose parents made little time for him, except for the antics that invited their attention, albeit, negative. He especially yearned for his father’s attention and praise, only to meet rejection and displeasure.

Insight and understanding seemed foreign to his parents. Therefore, parenting goals were implemented to engender positive experiences with Brian. The main therapy goal for Brian was to discover that he was lovable and worthy of positive attention. His father agreed to read to Brian at bedtime. His mother agreed to play with Brian for 30 minutes when his sister was napping. Both parents were instructed to be unconditionally accepting during this time, steering away from criticism and negative comments. For practice, I engaged the parents in role rehearsal situations. Ideally, coaching would have continued while I worked with Brian; however, his father refused to participate on a regular basis. I chose not to let this prevent Brian’s potential growth. His mother did attend parent sessions once per month and reported that father was reading to Brian at bedtime as promised. Therapy with his mother fostered new reactions to Brian. I encouraged her to become aware of subtle behaviors Brian might internalize as displeasures, such as heavy sighs or forgetting to smile and gaze warmly into his eyes. I modeled smiling and direct eye contact, which I surmised had been absent in her life for a long time.

Little Brian entered the playroom tentatively. He was dressed typical of a boy his age with jean shorts, a dinosaur shirt, and sneakers. He had short brown hair and large, round brown eyes that scoped about the room. As he stood still, looking about, I noticed his hands clenched in fists. There were no obvious stressors; however, he seemed defensively ready to take on a challenge. Brian persued the toys, finally settling with building blocks and soldiers. Session after session, Brian’s warriors engaged in battles, sometimes with soldiers, sometimes with Indians, alternate times with dinosaurs. He built fortresses out of blocks, designed to be impermeable by his enemies. When I inquired whether his character was the good guy or bad guy, he would respond similarly, “I’m the good guy, of course.” Then he would utter a heavy sigh, sounding very annoyed I could not automatically distinguish between the merits of the various characters.

In Brian’s play, he was always in charge. I sat on the floor with him, most often silently. Occasionally, I interjected an openended question such as, “I wonder what would happen if…” When he attacked a character, I offered a response he might feel when he felt attacked at home, “Ow! That hurt.” caused. Sometimes he would look up at me seeming pleased by the response he caused. Alternately, he would continue playing, seeming to ignore my interjections and engrossed in his process. At first enemies tortured and killed him. In time, Brian began surviving. Finally, we negotiated differences and he learned to coexist with his rivals. Brian even began to initiate friendships. All the while, his mother continued playing with him while his sister napped, and his father continued reading stories to him before going to sleep.

Over the course of one year, Brian’s parents reported that his “devilish” antics had subsided. In therapy, Brian began playing with some other toys just for fun. I determined the therapeutic process had been successful and it was time for Brian to graduate. His father participated minimally but it was sufficient for Brian to learn that he was loveable and had self-worth. Did his mischievous spirit persist? I hope so! That was Brian.

The medium of poetry served to convey the essence of Brian’s process of growth and change through play therapy. The opening poem depicted Brian’s struggle in words he was unable to express. Brian’s greatest conflict was to win the love and approval of his father. I remain uncertain whether he won that battle, especially since his father did not assume an active role in therapy. I am certain that until Brian was convinced he was a loveable person, he would have forged his fight for survival. And until Brian could master words to express his emotions, flower garden Indians would continue to be smashed and tool shed dinosaurs would continue to perish in flames. 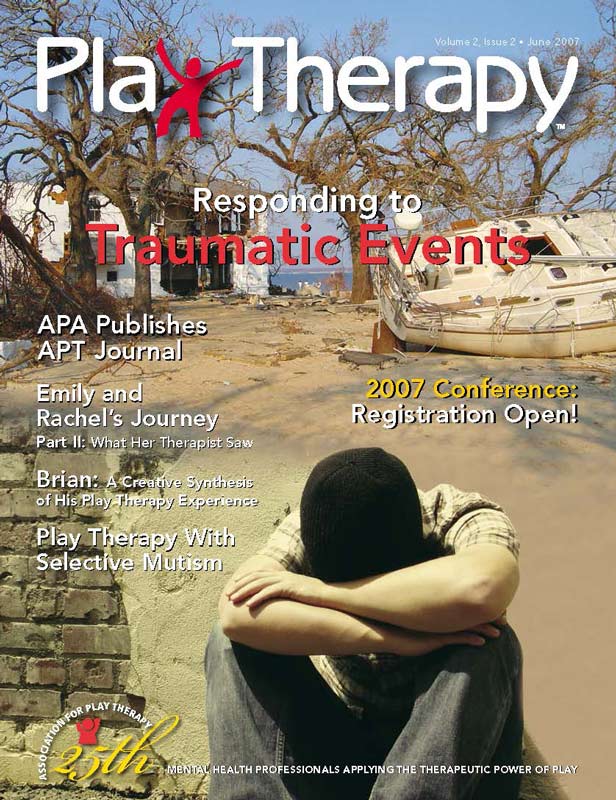 About the Author: Barbara Pedalino